On that evening Tyson Hood was browsing Facebook when he came across a post about a tiny kitten who had fallen into a storm drain. It was trapped where no one could get him and he had been meowing for help for four days when he saw it.

Luckily, Hood is the lieutenant of community risk reduction at his local fire department. Also, he has a huge soft spot for animals. He immediately sent a message to the person who posted it. “I’m a bit of a sucker for animals in distress and sent her a private message explaining that I worked for the local fire department in a capacity where I may be able to help,” Hood told. The next day, he heard the message notification ping, and he went to work on it.

He was not that familiar with cats and called his girlfriend for advice. She warned him that the kitten would likely be afraid of him and it could make the rescue more difficult. She was right. The little kitty was scared and confused. It took him an hour and a half to finally free him from the storm drain.

The Good Samaritan who first recognized the kitten was named Stephanie. After the meeting, she showed him the storm drain and explained to him that she has been feeding him regularly. So he was at least not starving.

After getting the grate out of the way Stephanie brought some Tuna and they placed it across from the tunnel so he had to completely exit the tunnel to eat. He caught on pretty quick that it was a trap and refused to leave the tunnel when could see Hood at all. But he trusted Stephanie so much! When Stephanie could see he had fully exited the tunnel to eat the Tuna she gave him a signal. All he did next was, cover the tunnel with the net before he could turn around and run in. it was pretty close, but instead he just ended up running fully into the net and he lifted him out.

The kitten was panicked at first but when he realized he was finally free and the people around him were also safe, he began to relax. It didn’t take him long to fall fully in love with his rescuer. He was an absolute lover of nonstop cuddles. Hood’s girlfriend asked him to make sure to bring the cat to his house. But Hood was not that much into that until the kitten took to his shoulders and he smelled horrendous. He fell for him so much.

Stephanie already had plans to adopt the kitten once he was freed, and Hood totally respected her. But he told her that he is ready to get him if things changed. And, a few days later he got the call. Hood officially became the little guy’s dad.

Since the kitten was found on Walnut Street, Hood decided to name him the same Walnut! He is now all settled into his new home! 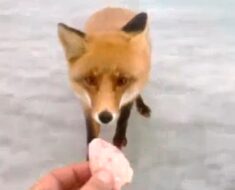 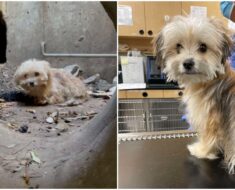 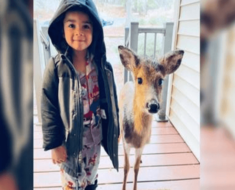 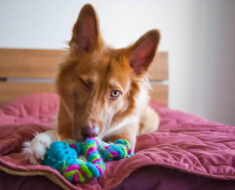 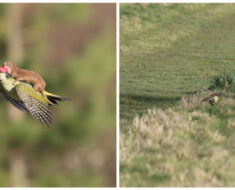