Home
News
Did You Know These Disney Characters Were Based On Real People?

No matter how old you are, Disney will always take out the child inside you. I know, just like me, every Disney fan has one or more favorite characters. But did you know that some of them were based on real people?

Hang on, we are about to enter the amazing Disney World. 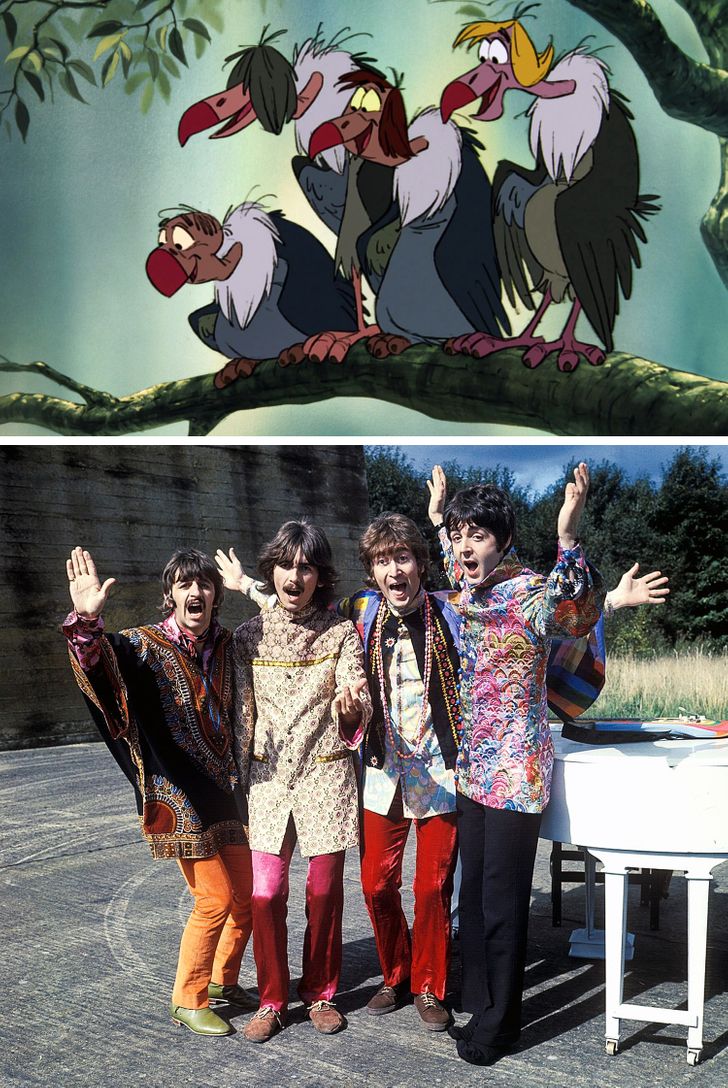 It was after making the animation version from the novel, Jungle Book, the filmmakers who were in charge of adaptation used the iconic members of The Beatles for the animation. So, the voices behind the four vultures are John Lennon, Paul McCartney, George Harrison, and Ringo Starr. If you remember the movie Jungle Book, you might remember how crazy the hairstyles of the vultures are and they sing the song, That’s What Friends Are For.

It was stated that John Lennon didn’t want to be in the movie, recommending the band manager to hire Elvis Presly instead, which he also declined. So, it was down to the voices of  J. Pat O’Malley, Digby Wolfe, Lord Tim Hudson, and Chad Stuart, imitating the accent of people from Liverpool. 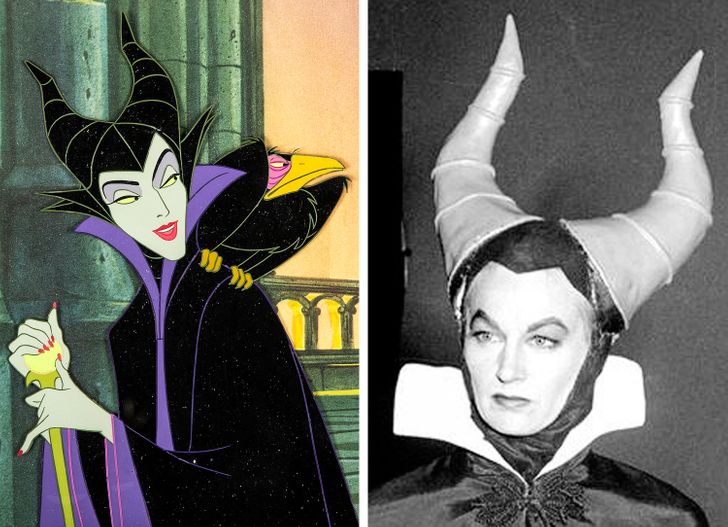 © The Sleeping Beauty / Disney, © Wikipedia
Audley was the voice of the Maleficent in Sleeping Beauty. But, her talents were far beyond just her voice. So, she was asked to act by the filmmakers, so they create a fictional character based on her. This led to hiring Eleanor to act as the evil stepmother Lady Tremaine, in Cinderella. 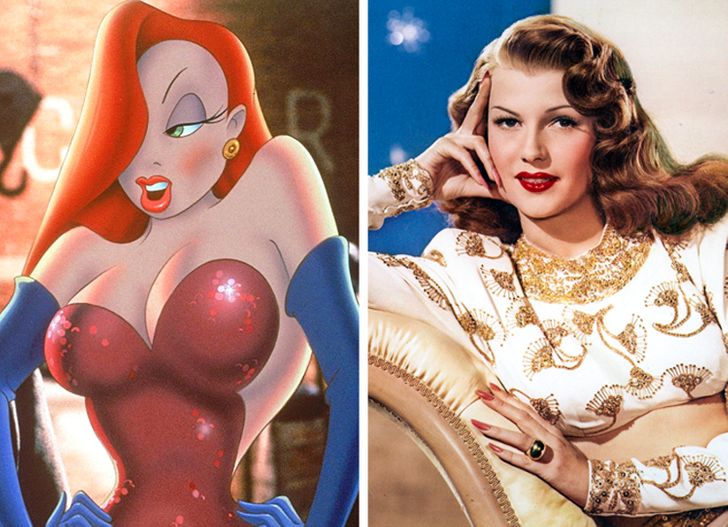 Rita’s stunning beauty in the film portrayal as Jessica Rabbit in Who Framed Roger Rabbit? led to its popularity among the people. The writer Gary K. Wolf wanted to design the character, Jessica Rabbit based on the dancer in Hot Red Riding Hood, an animated short film produced by Tex Avery. But after many alternations, it was down to Rita. But the director said that Jessica was based on Rita, only with Veronica Lake’s hair. 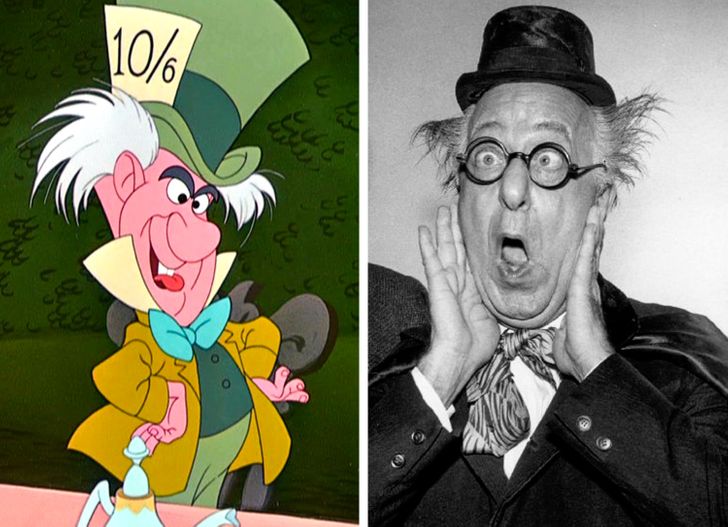 Many admire Mad Hatter in Alice in Wonderland, though he is, well mad. However, this character was based on Ed Wynn and his gestures and personality. Plus, he is the voice of the Mad Hatter too. 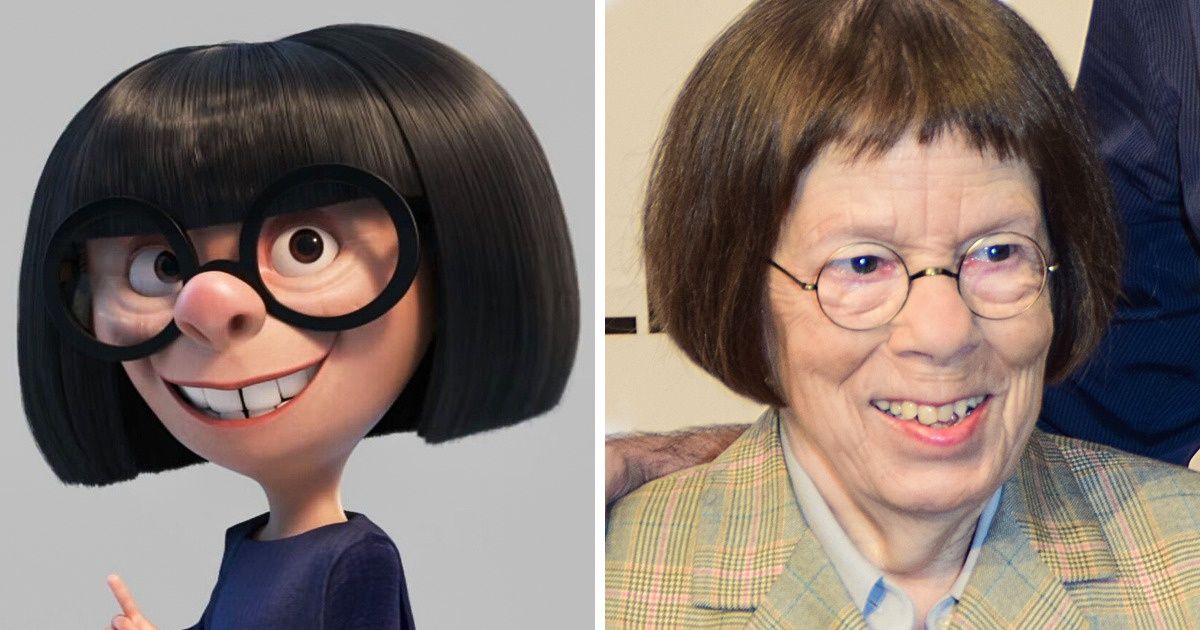 It is believed that Edna from The Incredibles is based on the life of the fashion designer, Edith Head. But, the resemblance of the character Edna with the actress Linda is too hard not to notice. 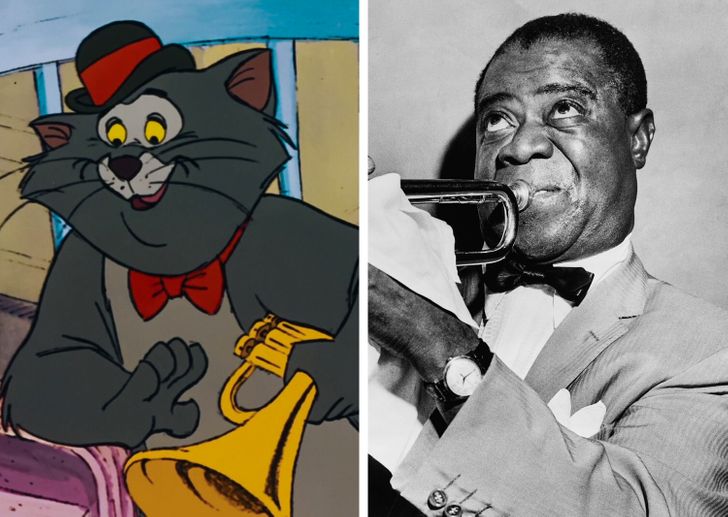 The Scat Cat from The Aristocrats was written for the jazz singer and trumpeter, Louis Armstrong. He was to sound the cat who was originally to be named as Satchmo the Cat. However, things didn’t go as planned. Louis’s health issues made him remove from the role and instead of him, Scatman Crothers was hired and the character’s name was changed as the Scat Cat. 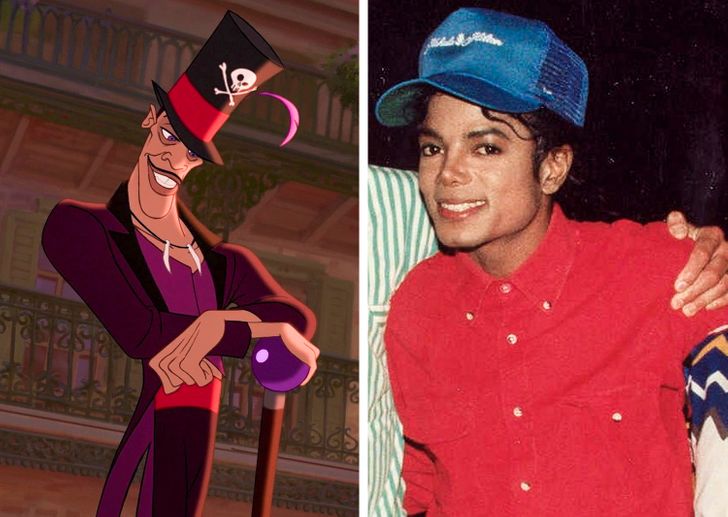 © The Princess and the Frog / Disney, © Alan Light / Wikimedia

Can you believe the villain from The Princess and the Frog was based on Michael Jackson? The slim figure and the clothes are not the only resemblances of the two. The mannerisms and postures of the ‘King of Pop’ can be vividly seen from the movie character. 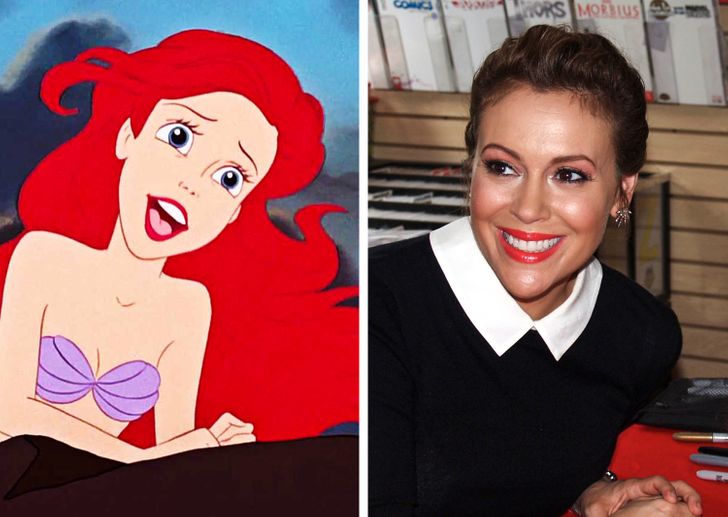 Alyssa Milano was the best for the character of Ariel, showing her youth, beauty, and sweetness. At first, Alyssa had no idea that Ariel was her. It was later when the directors presented her how the film was made that she realized Ariel was created with pictures at her young age. 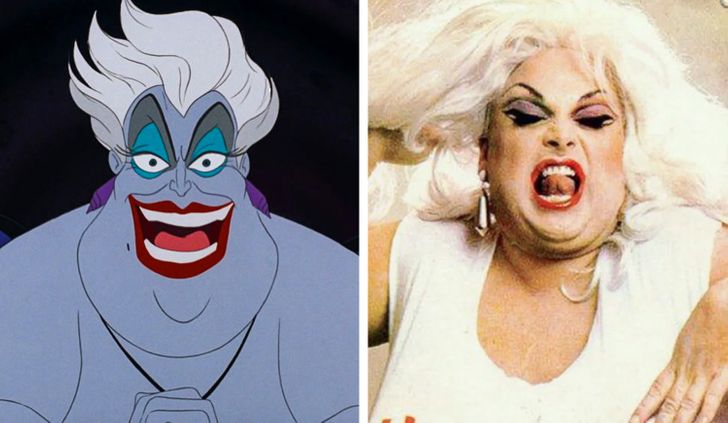 Harris Glenn Milstead aka Divine, a singer, and a drag queen was behind the creation of Ursula from The Little Mermaid. His shows and presentations were used to shape the villain’s character. 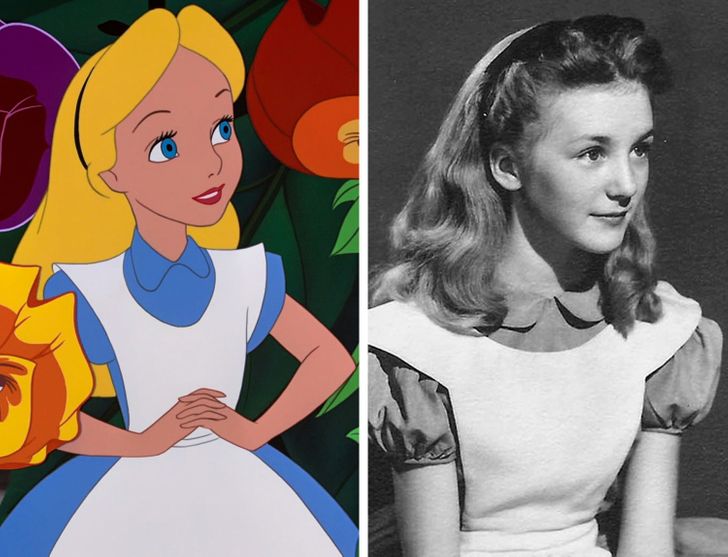 Kathryn is also the voice of Alice. She was only 10 years old when she was acted as Alice in Alice in Wonderland. 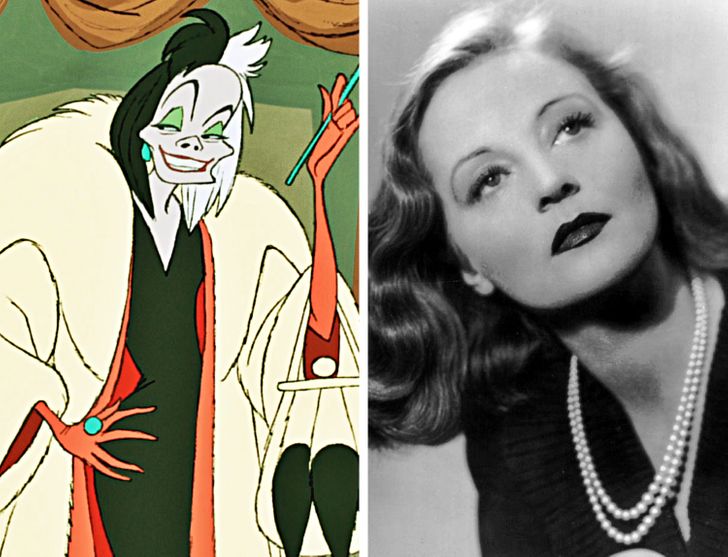 It was in 1961, that the character Cruella first appeared in the movie A Hundred and One Dalmatians. Betty Lou Gerson gave the voice to Cruella in the movie. This character was made from scratch using the personality and the gestures of Tallulah. 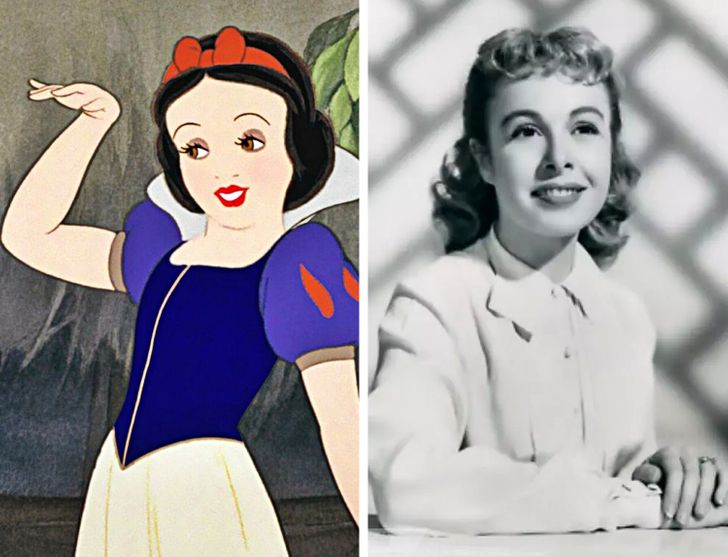 © Snow White and the Seven Dwarfs / Disney, © Wikimedia
Marge was only 14 when she auditioned for the role of Snow White. Her delicate movements and dancing won her the role. Another reason she got the role of Snow White was because of her father. It was her royal-like upbringing that caught the eyes of the directors. She always bowed and acted delicately more like a princess which made her the best for the character. 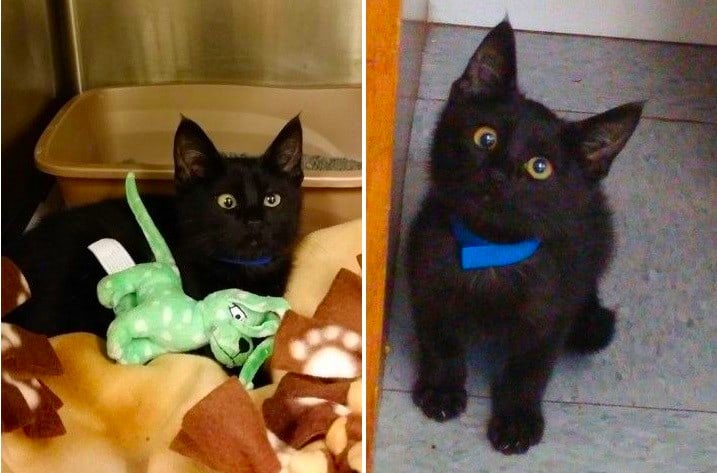